These are from the Victrix Roman General sprue, so will be "Big Men" on the battlefield, so they want to be look important and leader-y. This one is the Primus Pilus, or a generic Senior Centurion, there's also a Legatus and a lamely titled "General".

They'll also make for some interesting escort scenarios too

I commented on Facebook too, but I think the base is spot on for that, it'll look good on the table. I tried pill bases (basically two 1ps next to each other in size) and it's too small but that's about the size base I was considering for all my Roman cavalry, depending on how they operate on the table (close or open order, or both!)

I was watching a thing about the Praetorian Guard and how they would be used a bit like secret police, so the idea of an escort mission for a legatus (or other figurehead) and his praetorian bodyguard seems really appealing (one thing at a time!)
Top 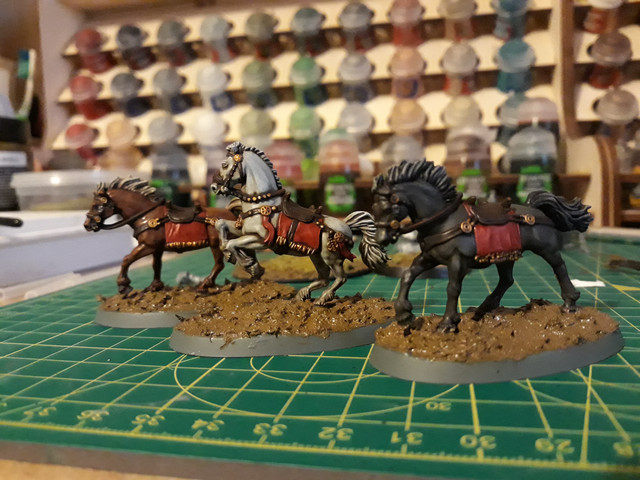 Will you be including Germanic skirmishers armed with javelins who ran with the cavalry?
They used to support the rider and try to hamstring enemies' horses.

In battle, a swift German light infantry soldier ran alongside each cavalryman, clinging to the horse’s mane to keep pace. He protected the cavalryman’s flanks and stabbed at the enemy horse. This was mentioned by Caesar.

The same day he moved his camp forward and pitched under a hill six miles from Caesar's camp. The day following he led his forces past Caesar's camp, and encamped two miles beyond him; with this design that he might cut off Caesar from the corn and provisions, which might be conveyed to him from the Sequani and the Aedui. For five successive days from that day, Caesar drew out his forces before the camp, and put them in battle order, that, if Ariovistus should be willing to engage in battle, an opportunity might not be wanting to him. Ariovistus all this time kept his army in camp: but engaged daily in cavalry skirmishes. The method of battle in which the Germans had practiced themselves was this. There were 6,000 horse, and as many very active and courageous foot, one of whom each of the horse selected out of the whole army for his own protection. By these [foot] they were constantly accompanied in their engagements; to these the horse retired; these on any emergency rushed forward; if any one, upon receiving a very severe wound, had fallen from his horse, they stood around him: if it was necessary to advance further than usual, or to retreat more rapidly, so great, from practice, was their swiftness, that, supported by the manes of the horses, they could keep pace with their speed.


Would be a nice 'point of difference' for the game.

Cheers
"When one goes, one must go with style."
Top

Sorry guys, probably asked and answered before, but what group sizes should I be planning for in my purchases.. ?

I asked Rich i a different thread and got the answer that barbarian skirmishers will be 6 per group.

Romans 8s all the time.
Barbarians 10s in groups, 6s in skirmishers
Chariots 3s with one leader chariot
Cavalry not sure yet, I asked Rich about it but he said he hasn't got that far yet. I'm hoping that they'll operate in open order rather than being ranked groups (I think that would look good on the table!)

DougM wrote: ↑
Wed Nov 27, 2019 2:08 pm
Thanks guys. I'm looking at the Victrix cavalry 12 to a set and hoping they will be in sixes.. as three groups from two sets seems like way too much cavalry.

Similarly I'm hoping for 8s for the Romans becuase the EIR cavalry come in packs of 16.
Top