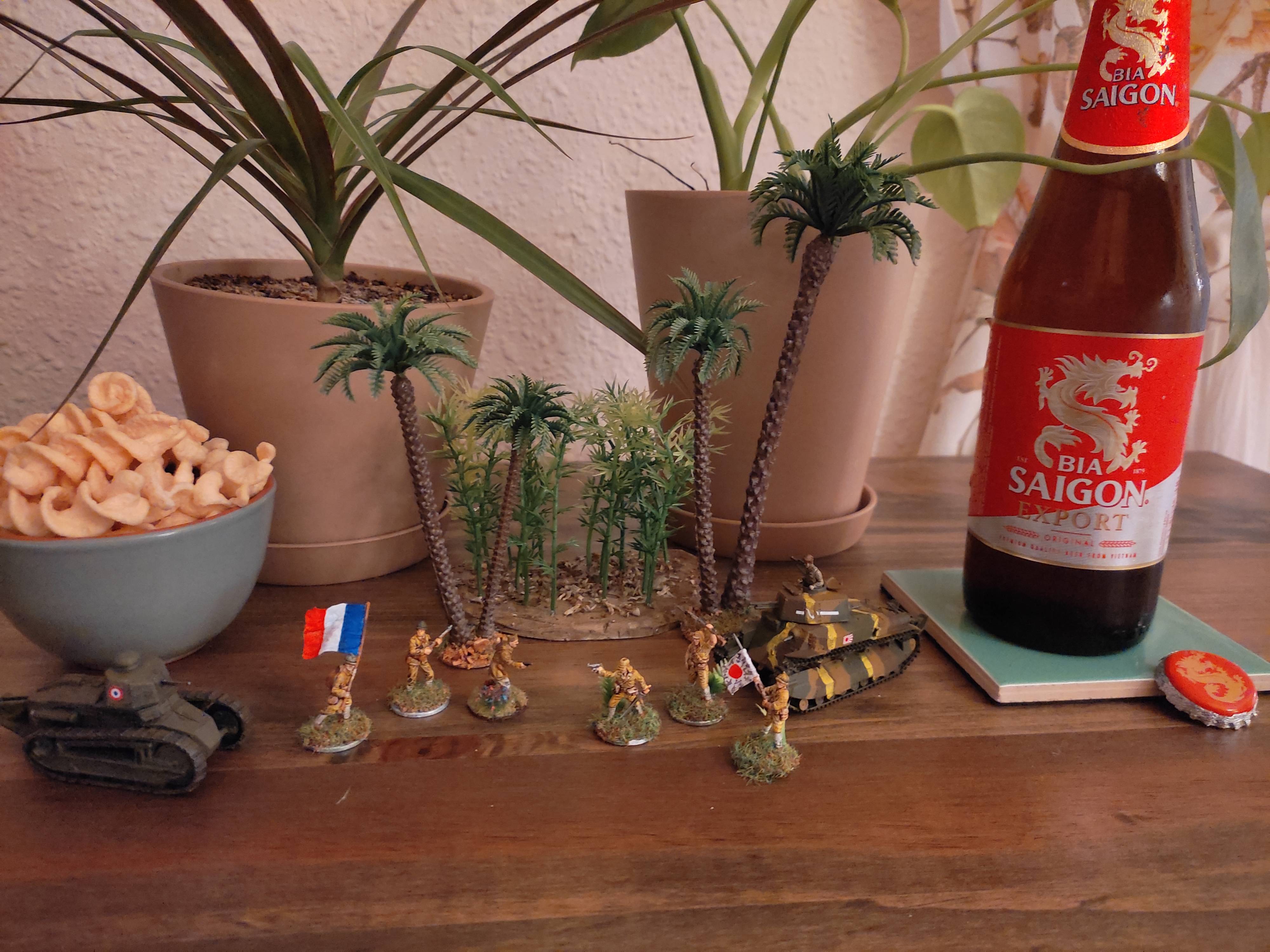 I'm happy to announce that the first round of playtesting of my fan-made Pint-Sized Campaign, Last Stand at Lang Son, is complete and that I have decided to share it with the community free of charge. You can download version 0.8 HERE.

Last Stand at Lang Son is a campaign set in the short, undeclared war between Vichy France and Japan in Indochina in September 1940. In it players will find a historical introduction, orders of battle, full army lists and scenarios to play through the campaign. Players will need the main Chain of Command rulebook and Blitzkrieg 1940 handbook, as well as (optionally) the At the Sharp End supplement to play the campaign.

The file will be updated as playtesting continues and will be suited to any new official rules we get on the Pacific front, so please watch this space if you're interested. Of course, any feedback is welcome and will be taken into account for future updates.

I hope you will have as much fun playing this campaign as I did designing it.

Merry Christmas to all!

Is it bad I read that as Auld Lang Syn?
Top

Wow how cool, just been researching this little known campaign.
Very much look forward to giving it a read and maybe a playtest if we can get the .Vichy French organised..

Thanks for sharing.
Top

Had a quick skim read, looks fantastic. Japanese Cavalry ...brilliant was looking for an excuse for making up a mounted squad (apart from China).

Didn't see the rules for them in my very quick skim ate they the same as Blitzkrieg? EDIT found the reference to BK rules at top of list, was looking in troop description. Might be an idea to copy them in in case people don't have BK to hand?

Will look forward to a proper read through on my PC.
Top

Thank you. I love works like this and am looking forward to reading it.
Top

Really impressive PSC for a novel and fascinating theatre - many thanks for sharing.

I think your French lists could also be used for the Franco-Thai war later in 1940 or even for the fighting when the Japanese seized power in early 1945. I don't know if the Japanese would have changed much by then, but expect the Vichy forces would be largely the same, and even less well equipped.
Capt Fortier

Right had my initial read, very impressive work and I have yet to go over the missions and campaign rules in detail.
However couple of questions popped up on first read.
1.) No off table mortars for Japanese only for French? Even if they didn't have 81mm mortars did they not get direct support from the Mtn gun batteries? ( I realise the Cavalry had no mortar support at this point of the war)
2.) I notice a number of water features, only he lake is defined. Perhaps it might be useful to know if the other ones are crossable and by whom/how?
Top

Thanks everyone, I hope you enjoy it.

@Tomm Well, when informed about the incident at Dong Dang, Roosevelt allegedly said he wouldn't go to war over any damn ding dong, so calling the campaign Ding Dong at Auld Lang Syne wouldn't be entirely unhistorical!

@Truscott Trotter Thank you for your comments! It would probably be convenient for the cavalry rules to be included in the campaign, but I was concerned about copyright issues and would prefer to encourage players to buy the Blitzkrieg book if they haven't. I also haven't reproduced the full French arsenal from the BK handbook for the same reason.

Re: Japanese artillery support, this was the object of an intense debate and I still haven't reached a final decision concerning them. From what I've been able to find out, the mountain artillery regiment was controlled at the divisional level and I had a hard time justifying making it available on call for a platoon leader other than as a pre-game barrage, and the Type 92 battalion guns are available albeit in a direct fire role (list 4).
Perhaps I could give the Japanese a FOO with a fixed-line telephone for a Type 41 or 94 mountain gun battery that would be functionally the same as a 81mm mortar barrage? Any suggestions are welcome.

You're right about the water features, I'll add further terrain notes in my next update. We played the streams in Dong Dang and Mai Pha as Heavy Going and the irrigation canal in table 3 bis as Broken Ground, same as the rice fields but without the benefit of cover for stationary infantry.

I'm looking forward to reading your thoughts on the campaign!

@Capt Fortier, I believe you're right, from what I've been able to find out the equipment in the Franco-Thai war would be largely identical. The ratio of officers to enlisted men was very bad in most Tirailleur units after the mobilisation (the 3e RTT swelled to five battalions at full strength) but perhaps the Tirailleur regiments like the RTA and RTC with only two or three battalions could be given a sergent-chef (inferior senior leader) and higher troop rating? Food for thought.
Top

Truscott Trotter wrote: ↑
Fri Dec 10, 2021 7:30 pm
Had a quick skim read, looks fantastic. Japanese Cavalry ...brilliant was looking for an excuse for making up a mounted squad (apart from China).

Return to “Chain of Command”